One of Walt Disney’s early Imagineers, Rolly Crump is known as a “true” original. He joined The Walt Disney Studios in 1952 where he quickly became one of the most multi-talented artists on Walt’s team. In 1959, he joined show design at WED Enterprises, later known as Walt Disney Imagineering. It was there that he became one of Walt’s key designers for some of Disney’s groundbreaking new attractions and entertainment, including the Haunted Mansion, the Enchanted Tiki Room and the Adventureland Bazaar.

Rolly also served as a key designer on the Disney attractions featured at the 1964-65 New York World’s Fair, including It’s a Small World and the Tower of the Four Winds. When the It’s a Small World attraction moved to Disneyland in 1966, Rolly designed the larger-than-life animated clock at its entrance, which sends the children of the world on a parade each quarter-hour.
Rolly would go on to contribute to the initial design of the Magic Kingdom at Walt Disney World in Florida, where he would improve upon such popular attractions as Peter Pan’s Flight, Mr. Toad’s Wild Ride, and Snow White’s Scary Adventures for the new Florida Park. Rolly aided in the master planning of EPCOT Center, and would serve as project designer for The Land and Wonders of Life pavilions prior to the 1981 opening. He departed from Disney in 1981 to lead design on a proposed Cousteau Ocean Center Park in Norfolk, Virginia, and to launch his own firm, the Mariposa Design Group. Rolly would develop an array of themed projects around the world, including work for Barnum and Bailey’s Circus World, Knott’s Berry Farm, and the Golden Nugget Casino.
In 1992, Rolly returned to Imagineering as executive designer, redesigning and refurbishing The Land and Innoventions at EPCOT Center. Rolly “retired” from The Walt Disney Company in 1996, but continued to work on a number of creative projects. He released his autobiography; It’s Kind of a Cute Story, in 2012.
Crump had a special relationship with Walt Disney, often sharing ideas and stories that would ultimately create an attraction or character at the park. Rolly has stated, “Walt had the ability to reach inside of you and bring out a part of you within, a part that even you were unaware existed. Walt’s character and how he ran the Studio brought out the best in me. I wouldn’t be the person I am today without Walt.” 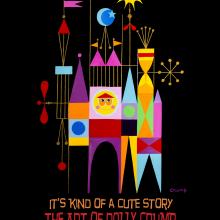