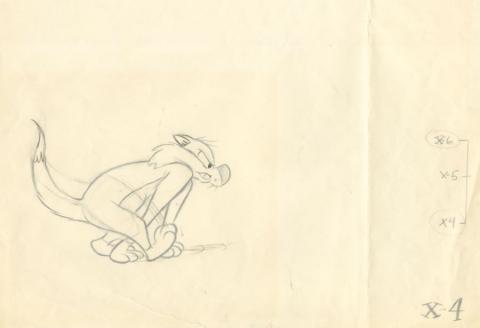 An original production drawing from a Warner Bros. Studios animated film starring Sylvester the Cat. Featuring an angry Sylvester barrelling forward, the drawing was created at the studio and used during production, likely in the 1970s. Measuring 9.25"x14" overall, with the character image measuring 4.5"x6", the piece is in good condition with light creasing throughout, a vertical fold on the right side, light edge wear including some tape on the right edge, and the top edge has been folded over and taped to the reverse side.