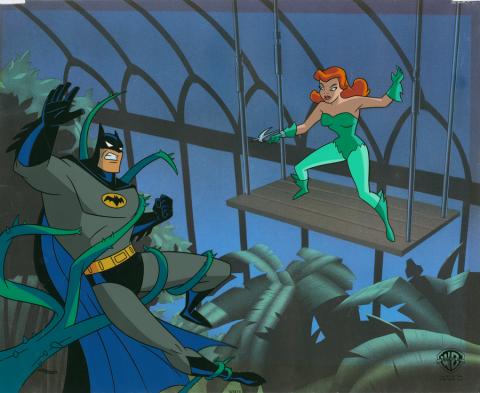 This is a limited edition cel inspired by the Warner Bros. Studios animated series, Batman the Animated Series. This piece, titled "A Touch of Poison Ivy," depicts a scene inspired by the episode "Pretty Poison," Batman becomes bogged down with professional entanglements when he pays a visit to the greenhouse-lair of the beautiful-but-deadly villain, Poison Ivy. This limited edition cel was created to capture a key pose of both Batman and Poison Ivy in a special scene. Created in 1994 at the famed Warner Bros. animation studio, the original drawing was hand inked and the master ink line was transferred to a clear acetate sheet using the serigraph process. These lines were augmented with "self color" lines, which were hand-inked on the front of the cel to help create the trademark shadows on the characters. In traditional animation style, the cels were then expertly hand painted on the reverse side. The dark, mood-setting background was created specifically for this cel by the same artists that produce Batman: The Animated Series. The backgrounds were reproduced using a four color lithography process. Each piece is hand numbered and stamped with the Warner Bros. seal of authenticity. This stunning piece measures 13.5" x 16.5" overall with the main image area measuring 11" x 14". The limited edition is in very good condition with light fading to background and the cel is partially stuck to the background.