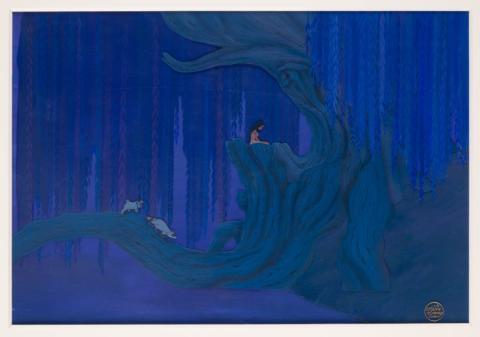 An original production background and recreated cel from the Walt Disney Studios animated film Pocahontas (1995). Featuring Pocahontas in an emotional moment Grandmother Willow while Meeko and Percy follow behind, the hand-painted background was created at the studio and used during the animation process. The cel was recreated at Walt Disney's Ink and Paint Department using original artwork from the film as reference. Disney had stopped hand painting cels years prior with The Little Mermaid (1989) being the last feature to have used the traditional animation technique. The studio released select setups with recreated cels in later years in an effort to continue to promote the art form still present in the hand-painted backgrounds. Measuring 18"x23" framed with the mat opening measuring 10.75"x16", the setup is in fine condition, unexamined out of frame.