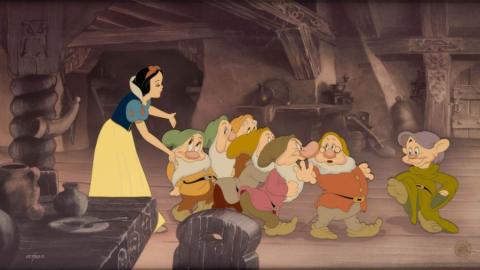 A limited edition cel inspired by the Walt Disney Studios animated film Snow White and the Seven Dwarfs (1937). Featuring Snow White guiding Happy, Doc, Bashful, Sleepy, Sneezy, Dopey, and Grumpy to bed, the limited edition is titled "Off to Bed" and was created in 1994. The original cels used in the production of this scene from Disney's first feature film are no longer available, so the imagery was recreated by the studio using traditional Disney animation techniques. The background of the cel has also been recreated from an original production background. Measuring 21.5"x30.25" framed with the mat opening measuring 11"x19.5", and the character image measuring 7"x15", the limited edition is in fine condition, unexamined out of frame, and includes the original certificate of authenticity. The certificate has been hand-signed by Disney Legends, and two of the Nine Old Men, Frank Thomas and Ollie Johnston.