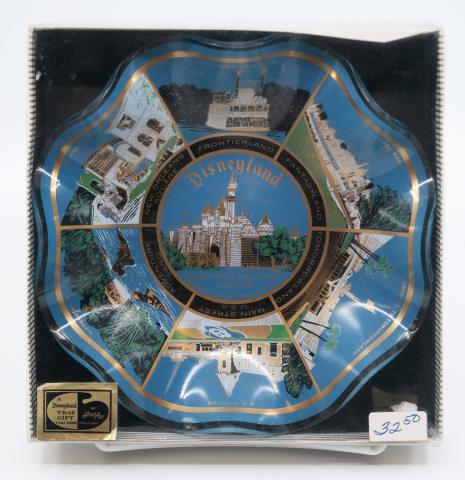 A unique scalloped glass plate from Disneyland park. Featuring the different lands of Disneyland park and highlighting several of the most popular attractions, the dish was sold in the parks around 1968. The imagery depicts the Railroad station on Main Street, The Jungle Cruise in Adventureland, Pirates of the Caribbean in New Orleans Square, Mark Twain Steamboat in Frontierland, It' s a Small World in Fantasyland, and the People Mover in Tomorrowland. Measuring 6.75" in diameter, the plate is in good condition and is still in its original box, which shows some wear and has a handwritten price sticker on it from a prior retailer.